Question 1.
Choose the correct alternative answer for the following questions.

Question 2.
∆ABC is isosceles in which AB = AC. Seg BD and seg CE are medians. Show that BD = CE. 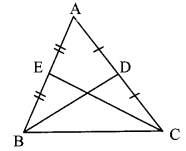 Question 4.
In the adjoining figure, points D and E are on side BC of ∆ABC, such that BD = CE and AD AE. Show that ∆ABD ≅ ∆ACE. 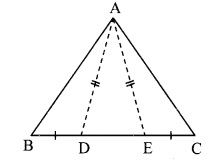 Question 6.
In the adjoining figure, bisector of ∠B AC intersects side BC at point D. Prove that AB > BD.

Question 7.
In the adjoining figure, seg PT is the bisector of ∠QPR. A line through R intersects ray QP at point S. Prove that PS = PR. 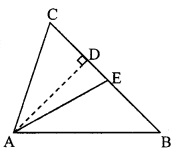 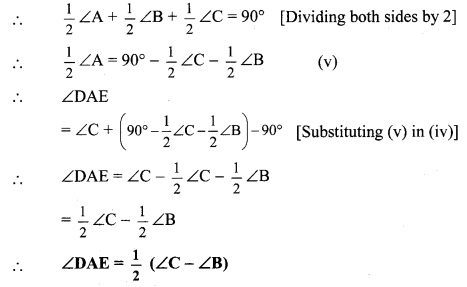 Question 2.
Check the congruence of triangles.

Draw ∆ABC of any measure on a card-sheet and cut it out. Place it on a card-sheet. Make a copy of it by drawing its border. Name it as ∆A1B1C1. Now slide the ∆ABC which is the cut out of a triangle to some distance and make one more copy of it. Name it ∆A2B2C2. Then rotate the cut out of triangle ABC a little, as shown in the figure, and make another copy of it. Name the copy as ∆A3B3C3 . Then flip the triangle ABC, place it on another card-sheet and make a new copy of it. Name this copy as ∆A4B4C4 . Have you noticed that each of ∆A1B1C1, ∆A2B2C2, ∆A3B3C3 and ∆A4B4C4 is congruent with ∆ABC ? Because each of them fits exactly with ∆ABC. Let us verify for ∆A3B3C3. If we place ∠A upon ∠A3, ∠B upon ∠B3 and ∠C upon ∠C3, then only they will fit each other and we can say that ∆ABC = ∆A3B3C3. We also have AB = A3B3, BC = B3C3, CA = C3A3 . Note that, while examining the congruence of two triangles, we have to write their angles and sides in a specific order, that is with a specific one-to-one correspondence. If ∆ABC ≅ ∆PQR, then we get the following six equations:
∠A = ∠P, ∠B = ∠Q, ∠C = ∠R ……..(i)
and AB = PQ, BC = QR, CA = RP …….(ii)
This means, with a one-to-one correspondence between the angles and the sides of two triangles, we get hree pairs of congruent angles and three pairs of congruent sides. (Textbook pg. no. 29)

Did you notice any property of sides of right angled triangle with one of the angles measuring 30°? (Textbook pg. no. 34)
Answer:
We observe that the length of the side opposite to 30° is half the length of the hypotenuse.

Question 4.
The measures of angles of a set square in your compass box are 30°, 60° and 90°. Verify the property of the sides of the set square. (Textbook pg. no. 34)
[Students should attempt the above activity on their own.]

Answer:
The point of concurrence of medians of the triangle divides each median in the ratio 2 : 1.

Question 8.
On a card-sheet, draw a triangle of sides 4 cm, 3 cm and 2 cm. Cut it out. Make 13 more copies of the triangle and cut them out from the card sheet. Note that all these triangular pieces are congruent. Arrange them as shown in the following figure and make three triangles out of them. 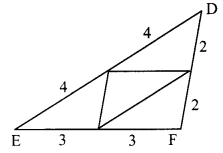 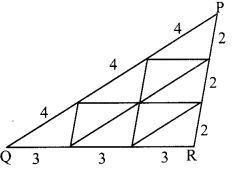 Question 10.
Prepare a map of road surrounding your school or home, upto a distance of about 500 metre. How will you measure the distance between two spots on a road? While walking, count how many steps cover a distance of about two metre. Suppose, your three steps cover a distance of 2 metre. Considering this proportion 90 steps means 60 metre. In this way you can judge the distances between different spots on roads and also the lengths of roads. You have to judge the measures of angles also where two roads meet each other. Choosing a proper scale for lengths of roads, prepare a map. Try to show shops, buildings, bus stops, rickshaw stand etc. in the map. (Textbook pg. no. 48)